How to rear Snail

By Unknown Wednesday, March 14, 2018
Introduction
Snail meat has been consumed by humans worldwide since prehistoric
times. It is high in protein (12-16%) and iron (45-50 mg/kg), low in
fat, and contains almost all the amino acids needed by humans. A recent study has also shown that the glandular substances in edible snail
meat cause agglutination of certain bacteria, which could be of value
in fighting a variety of ailments, including whooping cough.
Edible snails also play an important role in folk medicine. In Ghana,
the bluish liquid obtained from the shell when the meat has been removed is believed to be good for infant development. The high iron
content of the meat is considered important in treating anaemia. In the
past, it was recommended for combating ulcers and asthma. At the
Imperial Court in Rome, snail meat visiting dignitaries in the late
evening.
In West Africa, snail meat has traditionally been a major ingredient in
the diet of people living in the high forest belt (the forested area other
than the savannah forest). In Côte d'Ivoire, for example, an estimated
7.9 million kg are eaten annually. In Ghana it is clear that demand currently outstrips supply.
International trade in snails is flourishing in Europe and North America. However, in spite of the considerable foreign and local demand,
commercial snail farms such as those in Europe, South-East Asia and
the Americas hardly exist in Africa. In Ghana, Nigeria and Côte
d'Ivoire, where snail meat is particularly popular, snails are gathered
from the forest during the wet season. In recent years, however, wild
snail populations have declined considerably, primarily because of the

impact of such human activities as deforestation, pesticide use, slashand-burn agriculture, spontaneous bush fires, and the collection of
immature snails. It is therefore important to encourage snail farming
(heliculture) in order to conserve this important resource.

Advantages of snail farming
Environment
Snails are environment-friendly, because, unlike poultry or pigs, neither the snail nor its droppings smell offensively. Snails can also be
reared in the backyard.
Inputs
Capital, technical, labour and financial inputs in simple snail farming
are relatively low compared to those in other types of livestock farming (poultry, pigs, goats, sheep, cattle).
Snail meat
Snail meat is a good source of protein. It is rich in iron and calcium,
but low in fat and cholesterol compared to other protein sources like
poultry and pigs.
Disadvantages of snail farming
Climate
Without expensive artificial means of climate control, snail farming is
restricted to the humid tropical forest zone, which offers a constant
temperature, high relative humidity, preferably no dry season, and a
fairly constant day/night rhythm throughout the year.
Cultural restrictions
Snail meat is considered a delicacy by some, whereas others will not
even touch it for religious or cultural reasons.

Growth
Snails are relatively slow-growing animals. Furthermore the consumable meat makes up only 40% (maximum!) of the snail's total live
weight. Consequently snail farming is not a way to make money
quickly!
as a pest
Snails that have escaped from a farm, or been dumped by a farmer,
may quickly develop into a serious pest in agriculture and horticulture.
For these reasons it must be emphasised that snail farming should be
seen as only one component in a diversified farming venture. However, with patience, good management and careful integration into
existing farming activities, snail farming can provide substantial
longer-term rewards.
Planning a snail farming venture
Agromisa's AgroBrief No. 3, Snail Farming (M. Leeflang, 2005) provides useful guidelines for anyone considering snail farming (see also Appendix 1).
A sequence of five steps is sugested:
1 Plan (market, production, organisation)
2 Pilot production and sales
3 Go or no-go decision
4 Investment in facilities and know-how (cages/pens, finance, knowledge)
5 Upscaling (logistics, quality, financial control)
Prescriptions
The following chapters present prescriptions for the actual farming of
snails, e.g. suitable snail species, environment, housing, stock, feed
and health.

Caution: Before embarking on snail farming make sure you have a
market! This may seem self evident; but there are many examples of
cases in which giant African land snails (GALS) were introduced to
other parts of the world for farming, but were eventually dumped (or
allowed to escape) into the wild for lack of a market.
Once the snails have been introduced, dumped or allowed to escape,
they develop into a serious agricultural pest. Without any natural ene-mies they end up destroying a wide range of agricultural and/or horticultural crops and causing considerable economic damage. Achatina
fulica has a particularly poor reputation in this respect.
Giant African snails are considered a delicacy by people accustomed
to consuming them, whereas other people, even within the same country, will not even touch, let alone eat them. For that reason, don't start
farming snails unless you are absolutely sure someone will buy or
eat them species.
2.1 Biology of snails
Snails belong to a group of invertebrate animals known as molluscs.
Most molluscs carry a shell. Other members of this group include
slugs, mussels, squid and cuttlefish.
This Agrodok concentrates on the farming potential of the giant African land snails (GALS), more specifically the species Achatina achatina, Achatina fulica and Archachatina marginata. These belong to the
family Achatinidae, a diverse group of large pulmonate land snails,
originally from western, eastern, and southern Africa, with long slender shells. Their size ranges from 3 cm to 25 cm. The 14 genera are:
Achatina, Archachatina, Atopochochlis, Bequeartina, Burtoa, Columna, Callistpepla, Lignus, Limicollaria, Limicolariopsis, Lissachatina, Metachatina, Periderriopsis and Pseudachati. They mostly live in

jungles in tropical countries, but some may live in grassland. They
primarily feed on fruits and leaves. They are easy to find and not difficult to rear. They lay several batches of eggs each year. Generally,
they are quite easy to care for, being able to put up with a range of
conditions.
Essentially, a snail consists of two parts, the body and the shell. The
body is divided into three parts – the head, the foot and the visceral
mass. The head is not well demarcated and carries two pairs of retractable tentacles. One pair of tentacles is far longer than the other and
contains the eyes in the knobbed end. The long, muscular foot occupies almost the entire ventral surface and, like the head, is not clearly
demarcated from the rest of the body. A shallow longitudinal groove
runs along the centre of the foot. The hump-shaped visceral mass is
housed in the shell above the foot. It contains the digestive, reproductive, and respiratory organs.
The skin over the visceral hump secretes a large calcareous shell (98%
of the shell is made up of calcium carbonate). In most species the shell
Thank Suitable species 11
accounts for about a third of the body weight. It is the snail's protective casing. Whenever danger threatens, the snail withdraws its body
into the shell. 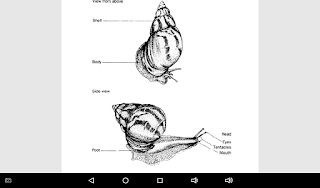 Figure 1
Figure 1: The main anatomical features of a typical snail

Although snails are hermaphrodites (i.e. they have male and female
parts), in most species the individuals mate with each other before laying eggs.
2.2 Suitable tropical snail species for farming
A list of edible snail species of African origin is provided below.
Europe and North America have over 20 edible species, of which the
most popular are petit-gris or the small grey snail, Helix aspersa, the
Burgundy snail, H. pomatia, and escargot turc or the snail of Turkey,
H. lucorum. Snail meat of these species is known as 'escargot' in
France; snail meat of GALS is sometimes exported from Africa and
sold as 'escargot achatine'.
The most popular edible snails in West Africa are the giant snail,
Achatina achatina, and the big black, Archachatina marginata. Local
names are given in the list below. Most studies on snails in West Africa have concentrated on these two species and on the garden snail,
Achatina fulica. In Ghana Achatina achatina is considered the most
prized species for eating, followed by Archachatina marginata and
then Achatina fulica.
Edible snail species of African origin
Achatina achatina. Common name: giant snail, tiger snail (Ghana)
Local names (corresponding language within parentheses):
Gambia: honuldu
Sierra Leone: konk
Liberia: dain (Nano), drainn (Gio)
Ghana: abobo (Ewe), elonkoe (Nzima), krekete (Hausa),
nwapa (Akan), wa (Ga), weJle (Dagarti)
Nigeria: katantawa (Hausa), ilako, isan (Yoruba)

Popular posts from this blog

Part 2 How to grow cassava with maximum yields

By Unknown Thursday, March 08, 2018
Planting at 45o Planting horizontally
Step 2: How to produce large quantities of cassava stems
Rapid multiplication in a nursery using 2-node cassava stakes. Plant the cuttings at a spacing of 1 m × 1 m on the crest of ridges or mounds as conventionally recommended. This will give a plant population of 10,000 stands/ha.
Vertical or angular planting is recommended in areas of high rainfall
Horizontal planting is better in dry areas.
Rapid multiplication technique can be used to produce large quantities
of cassava stems as planting materials for subsequent seasons.
Select and use improved, healthy, and pest/disease free cassava stems.
Cut the stems into several 2-node or 3-node stakes using
secateurs, a sharp knife/machete, or a stake cutting machine.
Treat the stakes with available insecticides or fungicides by
measuring out the quantities into a container, add water and
mix thoroughly. For example, 1kg of Neem leaf powder in 5L of
water. Put the stakes into the solution for 10 minute…
Post a comment
Read more

Opportunities in Agriculture in Nigeria

By Unknown Saturday, March 17, 2018
List of 10 Agriculture Opportunities In Nigeria, Farming in Nigeria has taken a dramatic turn to a better direction in recent years, creating jobs and opportunities for entrepreneurs who dare to go into farming business. Millionaires are currently being made every year through farming in Nigeria and there is certainly no end to the prospects of creating more wealth through farming in the coming years. Agriculture opportunities in Nigeria, There are good reasons why farming in Nigeria is doing very well. Understanding these reasons will help you (no matter where you come from) to think seriously about setting up farm in Nigeria. https://www.getresponse.com/?a=ojatech2 (GetResponse homepage)
1) There is no any other African country where Farming is as viable as it is in Nigeria in terms of productivity and profitability. 2) There is no other country where farmers are more advantaged as they are in Nigeria as regards demands for the produce. Take a look at my top five reasons why you mu…
Post a comment
Read more