Castor Oil For Garden Use: Tips On Treating Pests With Castor Oil

By Unknown Tuesday, March 13, 2018
Trying to be a good steward to the earth means minimizing your impact on the natural order of life. We do this in many ways, from driving a low emission car to choosing local foods at our supermarket. Another way to limit any negative influence on the earth is by gardening smart. Use safe, non-toxic herbicides, sustainable gardening practices and natural pesticides. Using castor oil in the garden can be part of good garden management without the potential side effects that commercial formulas may cause. Read on to learn more.

What is Castor Oil? 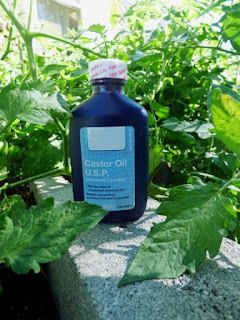 For many of us older gardeners, castor oil represents a childhood trial. Once upon a time, mothers gave their children castor oil to regulate digestive health. It was once thought to be good for the digestive system and spoonfuls of the foul stuff were force fed into unwilling children’s mouths. This foul tasting practice has gone out of fashion in favor of other better tasting and morje convenient over the counter remedies, but that doesn’t mean we need to retire the oil. There are many beneficial uses for castor oil, such as using the oil as a pesticide.
Castor oil for garden use may repel voles, moles and possibly other digging and tunneling animals, such as armadillos. Treating pests with castor oil is a natural, non-toxic way to repel these unwanted digging animals in your garden without hurting them or causing poisonous chemicals to build up in the garden and ground water. Additionally, using castor oil as pest control is non-toxic and safe around children and pets.
So where does castor oil come from? The castor bean plant, which is occasionally grown in gardens as an ornamental – BUT its beans are toxic and shouldn’t be grown where pets or small children are found. The oil itself, however, is safe and readily available through most retailers.

Castor Oil for Garden Use

Wild animals can pose a problem in the home garden. Mole hills pop up overnight, skunk  dig up prized plants in search of grubs, and squirrels unearth your bulbs and render them useless for the bloom season. One way to minimize the damage that naturally occurs when animals forage is to use castor oil as pest control.
It may sound silly but this out of fashion medicinal is a common part of natural commercial pesticides. How does castor oil repel animal pests? It seems the bitter taste and the unpleasant smell are the key. Just as children had to hold their noses to take the stuff back in the day, so too, our animal friends are sickened by the ripe odor and bitter taste.

Using Castor Oil in the Garden as a Pesticide

Castor oil won’t kill animal pests, but it will repel them. To harness the effect, you need to apply castor oil directly to the soil. The formula will work for a week or so even in the rainy season. Weekly applications are the most effective at controlling animal damage in the garden.
Use a hose end attachment and spray a mixture of 2 parts castor oil and 1 part dish soap. Mix the two items until they are foamy. This is the concentrated solution and needs to be used at a rate of 2 tablespoons per gallon of water. Apply evenly to the affected areas.
Treating pests with castor oil weekly will see fewer mole hills and dug up garden beds without any danger to your pets and children or the environment.
Reactions:

Popular posts from this blog

Part 2 How to grow cassava with maximum yields

By Unknown Thursday, March 08, 2018
Planting at 45o Planting horizontally
Step 2: How to produce large quantities of cassava stems
Rapid multiplication in a nursery using 2-node cassava stakes. Plant the cuttings at a spacing of 1 m × 1 m on the crest of ridges or mounds as conventionally recommended. This will give a plant population of 10,000 stands/ha.
Vertical or angular planting is recommended in areas of high rainfall
Horizontal planting is better in dry areas.
Rapid multiplication technique can be used to produce large quantities
of cassava stems as planting materials for subsequent seasons.
Select and use improved, healthy, and pest/disease free cassava stems.
Cut the stems into several 2-node or 3-node stakes using
secateurs, a sharp knife/machete, or a stake cutting machine.
Treat the stakes with available insecticides or fungicides by
measuring out the quantities into a container, add water and
mix thoroughly. For example, 1kg of Neem leaf powder in 5L of
water. Put the stakes into the solution for 10 minute…
Post a comment
Read more

How to rear Snail

By Unknown Wednesday, March 14, 2018
Introduction
Snail meat has been consumed by humans worldwide since prehistoric
times. It is high in protein (12-16%) and iron (45-50 mg/kg), low in
fat, and contains almost all the amino acids needed by humans. A recent study has also shown that the glandular substances in edible snail
meat cause agglutination of certain bacteria, which could be of value
in fighting a variety of ailments, including whooping cough.
Edible snails also play an important role in folk medicine. In Ghana,
the bluish liquid obtained from the shell when the meat has been removed is believed to be good for infant development. The high iron
content of the meat is considered important in treating anaemia. In the
past, it was recommended for combating ulcers and asthma. At the
Imperial Court in Rome, snail meat visiting dignitaries in the late
evening.
In West Africa, snail meat has traditionally been a major ingredient in
the diet of people living in the high forest belt (the forested area other
than the savann…
Post a comment
Read more

Opportunities in Agriculture in Nigeria

By Unknown Saturday, March 17, 2018
List of 10 Agriculture Opportunities In Nigeria, Farming in Nigeria has taken a dramatic turn to a better direction in recent years, creating jobs and opportunities for entrepreneurs who dare to go into farming business. Millionaires are currently being made every year through farming in Nigeria and there is certainly no end to the prospects of creating more wealth through farming in the coming years. Agriculture opportunities in Nigeria, There are good reasons why farming in Nigeria is doing very well. Understanding these reasons will help you (no matter where you come from) to think seriously about setting up farm in Nigeria. https://www.getresponse.com/?a=ojatech2 (GetResponse homepage)
1) There is no any other African country where Farming is as viable as it is in Nigeria in terms of productivity and profitability. 2) There is no other country where farmers are more advantaged as they are in Nigeria as regards demands for the produce. Take a look at my top five reasons why you mu…
Post a comment
Read more